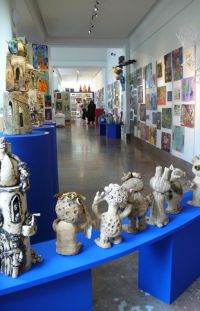 Photographs of the prize awards »

On Wednesday 27 May more than 200 guests attended the ceremonial award presentation held within the 37th International Children’s Exhibition of Fine Arts Lidice 2009 in the garden of the Lidice Gallery. Among the awarded children accompanied by their families and many other respectable guests there were Ing. Miloslav Vlček, the Speaker of the Chamber of Deputies of the Parliament of the Czech Republic, JUDr. František Mikeš, the First Deputy Minister of Culture of CR, Doc. Helena Illnerová, the Chairwoman of the Czech Commission for UNESCO, Ing. Vladimír Remek, the first Czechoslovak in space and a member of the European Parliament, Ing. Jana Bobošíková, a member of the European Parliament, the ambassadors of Bosnia-Herzegovina, Croatia, Egypt, Greece, Malaysia, Philippines, Turkey, United States of Mexico and Venezuela and representative of the embassies of Azerbaijan, Hungary, Romania, Russia, Serbia, Slovak Republic, Slovenia, Syria and Ukraine.

As every year, a varied programme was prepared for children, this year, however, affected with precarious weather conditions. As the garden had been rained on overnight, it was necessary to move the plays and games organized by the Leisure-time Centre Labyrint Kladno into the basement of the Lidice Gallery, which was also a venue for a presentation of educational programmes of the National Technical Museum Prague. The telescopes of the “Astrobus” of the Štefánik Observatory Prague were prepared for children in front of the Lidice Gallery from 9 a.m., with people from the Observatory answering children’s questions about the universe. The greatest attraction for children was rides in a carriage drawn by horses and the signing event by the 1st Czechoslovak in space, Vladimir Remek.

Though a “wet alternative” was prepared, weather got better at about 10 a.m., and 11 a.m. saw the beginning of the prize awards ceremony in the garden of the Lidice Gallery. After an opening piece Impromptu by Jan Hanuš played on the trumpet by Gustav Sedelmayer, a pupil of the primary school at Buštěhrad, Ms. Ivona Kasalická, the curator of the exhibition, welcomed the attendees and invited to the stage the Children’s Choir of the Japanese School in Prague to sing three Czech and three Japanese songs. Especially the songs “Holka modrooká” and “Jede, jede poštovský panáček” were readily sung along by all adults and children in the audience.

Afterwards the curator of the exhibition gave an opening note on the 37th edition of the exhibition, which was different in many aspects. She mentioned the record numbers of entries and participating countries (21,731 entries and 53 countries), the accompanying programmes and workshops for schools and also the new website of the exhibition. She concluded with thanks to all collaborators for their good work on the demanding task of processing all the entries, their registration and installation.
Then JUDr. Milouš Červencl, the director of the Lidice Memorial, summed up the 37th ICEFA in a short report and gave the floor to Ing. Miloslav Vlček, the Speaker of the Chamber of Deputies of the CR Parliament, who gave words of greeting, and to the 1st Deputy Minister of Culture Dr. František Mikeš to deliver an opening speech. Then the speakers, joined by a distinguished guest, the 1st Czechoslovak in space, Vladimír Remek, awarded the prizes to 42 laureates from Czech schools – “Rose of Lidice” medals and certificates as well as material prizes, books on art donated by Euromedia Group, t-shirts with ICEFA logo and puzzles donated by the Lidice Memorial.

The first foreign participant of the competition – 6-year-old Frederika Krempaská from the Primary Art School Spišská Belá – received her prize from Ing. Miloslav Vlček, the chairwoman of the Czech Commission for UNESCO Doc. Helena Illnerová and the consul of the Slovak embassy Ms Jozefína Škorupová. The second invited foreign participant was 8-year-old Ioana Bianca Anton from the Vasil Conta Primary School from IASI in Romania, accompanied by her art teacher Aurel Dascalu. Both Romanian guests, attired in Romanian national costumes, obtained the prize from Dr. František Mikeš, Doc. Helena Illnerová and the counsellor of the Romanian Embassy Mr. Constantin Stefanoaie. The last foreign guest was a 5-year-old Czech Mexican boy, Jan Alfonso Quiles Chytrý, or Jenicek, who came with his mother from Mexico. Jenícek got his prize from the ambassador of Mexico, H.E. Mr. José Luis Bernal Rodríguez.

The highest prize is the Prize of the Panel of Judges. This year the panel of judges unanimously agreed to award the prize to the František Kmoch Primary Art School at Kolín. This school was a surprise with its collection of first-class works – paintings, drawings, ceramics and combined technique. A crystal palette donated by Rückl Crystal a.s. was presented by Josef Zedník, the chairman of the panel of judges for the 37th ICEFA Lidice, and Ing Jana Bobošíková to a teacher of the school, Ms Alena Ertlová.

After the concluding piece Wild Rider by Robert Schuman played by Gustav Sedelmayer, the audience was invited to watch the opening of and view the exhibition on the 1st floor of the Lidice Gallery. After the tape was ceremoniously cut by JUDr. František Mikeš, Ing. Miloslav Vlček, Doc. Helena Illnerová and Ing. Jana Bobošíková, many visitors could view more than 1,400 pictures and plastic works by children from various parts of the world.

The opening concluded with cold buffet in the restaurant of the Lidice Gallery, talks with people from the observatory at the telescopes, workshops of NTM Prague and the last opportunity to ride in a carriage with horses. In spite of cold weather, all winners and guest were leaving happy and full of nice experiences. This year the opening was a success.

Invitation for the Ceremonial Opening

Organised by the Lidice Memorial under the auspices of:

The exhibition is held thanks to the support of:

The ceremonial opening takes place at the Lidice Gallery at Lidice on Wednesday, 27 May, 2009 at 11 a.m.

The children’s choir of the Japanese School in Prague will appear at the opening.

Programme of the opening:

From 9:00 a.m. to 3:00 p.m. the garden of the Lidice Gallery will host „Astrobus“ from the Štefanik Observatory in Prague as well as games and plays prepared by the Leisure-time Centre Labyrint Kladno.

The exhibition will last till 1 November, 2009.