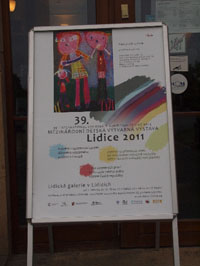 On Wednesday 1 June, 2011, in the presence of ambassadors and political and cultural figures of the Czech Republic, the Lidice Gallery of the Lidice Memorial had the ceremonial opening of the 39TH INTERNATIONAL CHILDREN’S EXHIBITION OF FINE ARTS LIDICE 2011.

The event saw the attendance of First Vice President of the Senate of the CR Přemysl Sobotka, First Deputy Minister of Culture of the CR František Mikeš, Deputy Minister of Education, Youth and Sports of the CR Eva Bartoňová, Head of Public Diplomacy Department Jan Bondy, Senator Jiří Dienstbier, RNDr. Jiří Žalman and Mgr. Hana Prixová-Dvorská from the Ministry of Culture of the CR and Chairwoman of the Czech Commission for UNESCO Prof. RNDr. Helena Illnerová, DrSc. From among the embassies of the participating countries, there were present the representatives of Afghanistan, Belarus, Bosnia and Herzegovina, China, Cuba, Germany, Greece, Hungary, Iran, Lithuania, Romania, Russia, Serbia, Syria, Ukraine and Venezuela.

An accompanying programme for children started as early as the morning. Though the weather was cold and it looked like raining all the time, little visitors did not allow the weather to spoil the festive day. They decorated gingerbread cookies prepared by the Primary School Buštěhrad, tested the sharpness of their eye and mind at the entertaining and educational items lent by IQ Park Liberec, which had been installed in the lobby of the Lidice Gallery. At 10 a.m. they could see a juggling performance by Vojta Vrtek. Children also enjoyed rides in a horse-drawn carriage.

At 11 a.m. children from the Primary Art School Lounských from Prague 4 opened the prize award ceremony on the patform in the garden of the Lidice Gallery, followed by dancing and singing children from the Armenian School in Prague. Having welcomed the guests, Ivona Kasalická, curator of the exhibition, gave the opening speech of the 39th edition of the exhibition. She mentioned the record number of the entries received and the countries represented in the competition as well as the demanding work of the panel of judges. She also congratulated the children who were awarded the highest prize, the “Rose of Lidice” medal. Then Head of the Lidice Memorial JUDr. Milouš Červencl briefly summed up the 39th ICEFA and gave the floor to First Vice President of the Senate of the CR Přemysl Sobotka and Deputy Minister of Culture JUDr. František Mikeš who presented their speeches. Thereafter, Deputy Minister of Education, Youth and Sports Eva Bartoňová and Head of MFA Public Diplomacy Department Jan Bondy joined the First Vice President of the Senate and the First Deputy Minister on the platform to award 42 laureates from Czech schools the “Rose of Lidice” medals and certificates as well as material prizes – arts books donated by Euromedia Group, ICEFA Lidice Profile Catalogue 1967 – 2009, colouring books and crayons. An interesting keepsake for each of the winners was their own entry made into the form of a cardboard jigsaw donated by Atlas.

The highest award of the competition is the Prize of the Panel of Judges. This year the panel unanimously agreed to award the prize to the Hong Kong school Simply Art. This school presented surprisingly good works of art – paintings and drawings. Lidice saw 12 children and the teachers-artists Henry and Iris Lau from Hong Kong coming to receive many awards. The laureates received the crystal palette from Chairwoman of the Czech Commission for UNESCO Helena Illnerová, Ambassador of the People’s Republic of China J.E. Yu Qingtai, Senator Jiří Dienstbier, jr. and Chairman of the ICEFA Lidice 2011 Panel of Judges Josef Zedník.

After the final fanfare, all guests were invited to view the exhibition installed on the first floor of the Lidice Gallery. Then the ceremonial cutting of the tape followed (Přemysl Sobotka, František Mikeš, Eva Bartoňová, Helena Illnerová) and over 500 visitors could view more than 1,400 pictures and 3D objects by children from all quarters of the world.

The opening ceremony was rounded off with a cold buffet in the restaurant of the Lidice Gallery and a theatrical performance by Vojta Vrtek in the garden. Though the weather was cold, the winners and the visitors left contented an full of impressions. This year’s opening ceremony was a success.

Invitation for the ceremonial opening 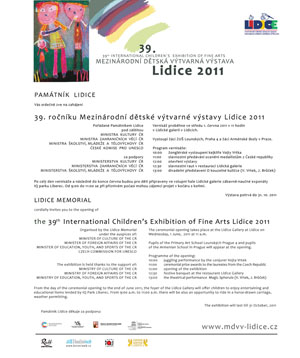 The ceremonial opening takes place at the Lidice Gallery at Lidice on Wednesday, 1 June, 2011 at 11 a.m.

Pupils of the Primary Art School Lounských Prague 4 and pupils of the Armenian School in Prague will appear at the opening.

Programme of the opening:

From the day of the ceremonial opening to the end of June 2011, the foyer of the Lidice Gallery will offer children to enjoy entertaining and educational items lended by IQ park Liberec. From 9:00 a.m. to 11:00 a.m. there will be also an opportunity to ride in a horse-drawn carriage, weather permitting.

The exhibition will last till 31st October, 2011