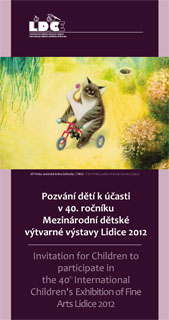 to commemorate the 100th birth anniversary of Jiří Trnka (1912 – 1969), a world-famous painter, printmaker, puppeteer, sculptor and illustrator as well as the founder of Czech puppet and animated film, the main theme of this year’s international art competition was set to “THE THEATRE – THE PUPPET – THE FAIRYTALE”. The Lidice Gallery got filled with an incredible lot of puppets, ranging from Spejbl and Hurvinek over glove puppets to marionettes, of small home theatres, shadow theatres, designs of coulisses, curtains, masks and costumes. Also a lot of spectators, actors, directors, musicians and opera singers could be found among the entries. The panel of judges was pleased by world-famous or nationally famous theatres as well as glances into the theatrical history of various countries. Our thanks go to all who had prepared their art collections responsibly and sent in their entries this year, both schools and individuals.

Extensive art compositions show that schools often prepare their entries for our exhibition collectively – both the Czech and the foreign ones. The entries positively emanated the zest, joy and pleasure associated with the process of their creation. The panel didn’t try to hide their enthusiasm over some splendid ideas in the ceramic, paper, plastic or wooden entries or in drawings, paintings and prints. Thus, as every year, we can say that the vast majority of entries achieved an excellent artistic standard and was well selected, with sensibility and discretion. On the other hand, the standard of some other entries was very poor, betraying ignorance of the children and superficial approach of their teachers.

This year we received 26,064 entries from 67 countries, many of which participated in the exhibition for the first time (Bahrain, South Africa, Pakistan, Portugal, Seychelles, and Vietnam). Some countries had more schools and children participating (Hungary, Estonia, the United Kingdom). However, the numbers of entries from individual countries widely varied; besides large collections from Belarus, Bulgaria, Hong Kong, Latvia, Russia, Turkey and Ukraine, there were also countries represented by only several entries, often from a single school, so that it was impossible for the panel to assess the artistic standard of the country and to select the very best of it.

Out of 26,064 entries from 67 countries 1,434 were selected by the panel of judges to win prizes including 269 medals. Out of 17,404 foreign entries 724 won prizes including 122 medals (94 medals to individuals and 28 medals to schools for their collections). The most medals were given to children from Bulgaria, Latvia, Russia, Turkey and Ukraine.

This year, the Prize of the Panel of Judges was awarded to the Turkish school Kocaeli Bahcesehir Koleji in Kocaeli, which participates regularly in our exhibition, achieving excellent results every year. This year it had sent in a well-balanced and unique collection of planar works, which was assessed by the panel as the best collection of the edition.

The 40th International Fine Arts Competition culminated in the exhibition of winning works, which will be open ceremonially at the Lidice Gallery at Lidice on 30 May 2012, in the presence of many ambassadors and political and cultural figures of the Czech Republic. This year, an invitation to the opening of the exhibition was sent to representatives of the school awarded with the Prize of the Panel of Judges – the laureates and teachers of the Turkish school Kocaeli Bahcesehir Koleji and two laureates from Jugla High School in Riga.

Lidice will have the exhibition opened from 31 May to 31 October 2012. Then the exhibition will be hosted by Riga, Latvia, and Vilnius, Lithuania, followed by the Primary Art School Most and other venues in the Czech Republic and abroad.

Our thanks go to all who took part in the competition, to all who drew, painted, printed or modelled their vision of the given theme and sent their creations to the competition, regardless of whether they won a prize or not. We thank also to all teachers because it is the character of the teacher, his skill, knowledge, zeal and responsibility what plays a vital role in good results of children’s art work.

Ivona Kasalická, Head of the Lidice Gallery and Curator of ICEFA Lidice
May 2012