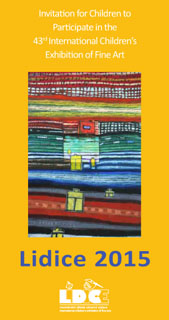 Dedicated to the theme LIGHT at suggestion of the Czech Commission for UNESCO to celebrate 2015 as the International Year of Light, this year's edition saw 21,380 participating children from 71 countries. Compared to previous years, the numbers of entrants and countries were lower, nevertheless, the amount of entries was overwhelming and challenging in terms of processing and evaluating. The Lidice Gallery was literally flooded and lighted up with entries featuring light – with suns, stars, lit-up cities and streets, cathedrals, tunnels, auroras, fires, fireworks and volcanoes as well as secrets of optics. Lightbulbs, lamps, candlesticks, candles and rays of light emanating from them could be counted in thousands.

The selection process eliminated entries that did not meet the technical requirement of the competition – they did not depict the recommended theme, exceeded the maximum size (50 x 70 cm), were mounted on colour papers or in a passepartouts, the limit in number of entries by the same artist in one medium was exceeded – or entries that were visually poor, in terms of composition, material or technique. Many vast collections that had not been pre-assessed by the teacher contained schematic and unfinished works in which an effort prevailed to depict the theme realistically, to the detriment of visual imagination, often accompanied with the use of unsuitable art (or rather non-art) materials and techniques, insufficient guidance in composition as well as presentation in exaggerated forms and sizes. Although it was expected that the theme would offer wide opportunities for interesting and innovative artistic interpretation, the panel of judges had to state that rather the opposite held true. In most entries, the theme was treated in a rather descriptive manner, often in a simplified, one-sided way. On the other hand, the gratifying thing is that there were other entries that were artistically very well done and contemplated also the inner, spiritual light.

In professional discussions, the panel sought the causes of both the lower number of entries and particular tendencies that had been indicated also in previous editions. The panel saw a gap widening between the average or under-average collections and those distinguishing themselves with the originality of their interpretation of the theme and the refinement of its execution. Commendable are those collections that had been sorted out carefully to represent the purposive and consistent work of individual schools or other institutions in which pupils are educated in arts.

Summary on the foreign entries:

Out of 13,819 foreign entries from 69 countries (apart from Czechia and Slovakia) and  1,171 organizations, 533 won prizes, including 81 medals (61 medals to individuals, 1 medal for a collective work and 19 medals to schools for their collections). Most awards went to children from China, Lithuania, Latvia, Romania, Russia, Slovenia, Serbia and Ukraine.

As has become a tradition with the foreign entries, tempera and acrylic paintings and various types of pastel drawings prevailed, supplemented by works in less common and more difficult media (aquatint, etching and drypoint) as well as aquarelle paintings and pencil drawings. Traditional techniques, such as painting, showed a certain decline in numbers and quality; on the other hand, photographs and their collections were more abundant than in previous years. A plausible explanation may be that the theme LIGHT was powerful inspiration for young photographers and that the technical equipment required for this form of artistic rendition is more readily available.

Interesting collections came from schools in Bulgaria, Estonia and Latvia, and what came as a pleasant surprise was collections from Hungary, Slovenia and Serbia. Most schools in these countries, works of which were presented to the panel of judges, deserve appreciation for their high standard of execution of the theme in printmaking techniques. Traditionally well represented countries, such as Russia and Ukraine, got somewhat stuck in the traditional interpretation of the theme and its artistic execution. As usual, photography was well represented by collections from Croatia and Lithuania, nevertheless, as a pleasant surprise came photographic contributions from countries that had not yet sent in good entries made in traditional media, e.g. Israel, Uzbekistan, Ukraine and the UK.

Among foreign entries, the spatial ones were represented particularly in the Latvian collection presenting interesting items of ceramics and glass.

Summary on Czech and Slovak entries:

Czech children sent in 5,658 entries from 356 organizations this year and received 611 prizes including 90 medals (60 medals to individuals and 2 for a collective work of children and 28 medals to schools for their collections).

In comparison to last year and in contrast to the decline in the numbers of entries and participating foreign organizations, this year's edition saw more participants and more organizations from the Czech Republic, some of them participating for the first time. As in the last edition and primarily thanks to systematic and professional work of the teachers, a great success arrived for planar works (including photographs) by children from the following art schools: Háj ve Slezsku, Hradec nad Moravicí, Hranice, private Jeseník, F. Kmoch Kolín, Krnov Hlavní sqr.  Kroměříž,  Mnichovo Hradiště, Most Moskevská street, Mšeno, Nové Město pod Smrkem, Olomouc, Písek, Plzeň  -Jagellonská and T. Brzkové streets, Prague 3 - Štítného street, Prague 5 – Štefánikova street, Prague 9 Čakovice, Prostějov, Řevnice and Strakonice. All the more, however, the panel of judges appreciated the skilful work of teachers at first-level schools, e.g. Červené Pečky, Opava – T.G. Masaryk street, Sedmikráska Rožnov pod Radhoštěm, at special schools, e.g. Centrum Arpida České Budějovice, Home for the Handicapped Zběšičky and Domov Raspenava, as well as at children and youth centres, e.g. DDM Český Krumlov, Art Workshop Paletka Plzeň and Atellier JOE in Roztoky. The panel was pleased to acknowledge the increase in the number of art schools that had participated for the first time and sent in good collections, e.g. Art School Bystré and Art School Dačice. Compared to previous years, the number of spatial entries decreased this year, the theme of light being difficult even for schools that has been consistently successful in 3D items.  Gratifying for the panel were items of ceramics from Art School Český Krumlov, glass collections from Art School Mšeno and collection of paper-mache items from Art School Strakonice.

From among the Czech schools, the Prize of the Panel of Judges, awarded to schools for their persistent, purposeful and excellent work with children, was given to Art School Mšeno, which presented itself with an incredibly rich and interesting collection that definitely surpassed others in the scope of the media used, both in planar and spatial works. It needs to be mentioned that for many years now, the school has not been afraid to experiment, seeking offbeat, innovative ways and artistic possibilities and using, besides usual materials, also glass, metal and plastic as well as digital technologies.

As for foreign candidates to the Prize of the Panel of Judges, there were several of them of even quality. After the final discussion, the panel awarded the prize to the organization Młodzieżowy Dom Kultury - pracownia plastyczna "Creatio" from Polish Rybnik, which had presented a splendid collection of prints and receives high accolades at ICEFA Lidice every year.

The 43rd edition will culminate with the exhibition of all awarded entries, which will open in the presence of many ambassadors as well as political and cultural figures of the Czech Republic at the Lidice Gallery in Lidice on Saturday 30 May 2015. Invitation to the opening ceremony was extended to representatives of the schools awarded with the Prize of the Panel of Judges.

The exhibition will take place in Lidice from 30 May till 31 October 2015. After that, Art School Most will follow as a venue as well as other locations in the Czech Republic and abroad.

We would like to conclude with words of thanks to all young artists who embarked on hard creative work to capture the difficult theme. The prizes were awarded to the best entries demonstrating interesting ideas and innovative ways of execution that reflect the broadness of child's imagination; nevertheless, all this year's entries deserve appreciation because they testify to the fact that artistic creation plays an irreplaceable role in the life of children across continents. Our thanks belong to all who work with children, developing their imagination and visual sensitivity and helping them master the traditional and alternative artistic techniques.

These rules come into effect on 1 December 2014.