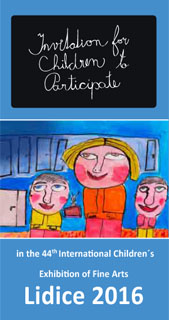 Marking the 70th anniversary of UNESCO and its foremost priority – educational development of all people, this year's edition dedicated to the theme SCHOOL? EDUCATION saw 18,075 participating children from 77 countries.

The theme only seems easy. This year it was confirmed more than ever how important in the course of children's artistic work the role is of a teacher who is able to motivate the children and pick up an inspiring element among the sub-themes of an initially not very attractive theme, offer them a suitable artistic medium and encourage them to render it in an interesting way. Certainly, the prevalent motive of the competition entries was the school environment, which children are very familiar with – school buildings, roads and paths to schools, teaching staffs and non-teaching personnel, specialized classrooms and rooms full of interesting specimens. Children were keen to show us their classrooms, invited us to participate in their classes, made us acquainted with their teachers, schoolmates and friends, drew us into vigorous activities pursued during breaks, took us to interesting school excursions and trips and many times they unpacked their school bags including snacks. Many children paid special attention to Comenius whose face was present in almost every collection from Czech schools, but surprisingly, also in many foreign ones. Making comparisons of how interestingly the theme of the school was rendered by children from various countries, we could say that it was more inspiring for children from Czech schools than for foreign participants. In general, Czech children less frequently expressed themselves in a simplistic way and their works well developed the theme of the school and the school life as well as school observations, thoughts and ideas.

Also this year, there were some entries with unsuitable make-up, exceeding the limits on dimensions, poorly labelled or made by artists older than allowed by the the rules. In contrast with previous years, however, the overall quality of the collections improved. Our praise goes to the teachers who carefully selected their entries to send in only the best ones. This year there were also many prints that were well done from the technical as well as artistic point of view.  On the other hand, in contrast to previous years, photographs were much scarce and featured less interesting subjects.

Out of the total of 18,075 entries from 77 countries and 1,483 organizations, 1,390 were awarded prizes including 212 medals (147 individual medals, 3 medals for children’s team work and 62 medals to schools for their collections) for 68 countries  and 448 organizations.

Summary on the foreign entries:

Although there were less participants this year, the competition widened its geographical scope – this year saw 6 new countries (Chile, Cyprus, Luxembourg, Palau, Senegal, Tajikistan) and some other countries coming back after a longish gap (e.g. Belgium, Canada, Morocco and Zimbabwe). There have been 366 new participants among foreign schools.

The highest number of awards goes to children from Belarus, Bulgaria, China, Croatia, India, Iran, Latvia, Poland, Russia, Slovenia and Ukraine. By contrast, some other countries were scantily represented this year, often by only one school with several entries, which reduced chances for winning an award and made impossible for the panel to assess the artistic level of the country in a complex way (Argentina, Egypt, Ethiopia, the Philippines, Italy, Cambodia, Kosovo, Laos, Malta, Norway, Palau, Austria, Greece, Spain, Sweden, Switzerland, Tajikistan, Vietnam, Zimbabwe).

As to the art media in foreign entries, painting prevails, often not very well mastered and characterized by colourfulness for its own sake. On the other hand, there are some very good paintings and above all, prints, the amount and quality of which is growing year by year. Traditionally good quality can be found in Bulgarian entries (exquisite collections from Fine Arts School Targoviště or Art Studia Prikazen Svjat Sofia), China (an excellent collection from Simply Art Hong Kong), India (Young Envoys International Hyderabad) and Latvia, every year's success of which is based on excellent cooperation of the organizers of the Latvian national sub-competition Lidice, who bring to Lidice spatial entries by Latvian children, who like and know how to work in ceramics, glass and textile. On the other hand, some entries from other countries demonstrate that many schools use the same art techniques notwithstanding the recommended theme; the unvarying method of their work diminishes their chances to succeed in the competition.

Summary on Czech and Slovak entries:

Czech children from 335 organizations sent in 5,050 entries this year and received 676 prizes including 111 medals (69 medals to individuals and 1 for a collective work of children, 41 medals to schools for their collections). Children from 146 organizations has been awarded this year.

Although the number of foreign entries decreased as against last year, the same cannot be said about the Czech entries – this year their number was the same as last year; it is gratifying that additional 50 schools joined the competition.

Having sent in 1,733 entries from 113 organizations this year, Slovak schools received 177 prizes including 32 medals (24 medals to individuals and 8 medals to schools for their collections). Children from 51 organizations has been awarded this year.

The number of entries sent in from Slovakia hasn't been significantly smaller than that of last year; the same applies to the number of participating schools. The most successful art schools were J. Cikker Art School Banska Bystrica, Art School Holíč, A Cíger Art School Kežmarok and Art School Spišská Belá, among the entries from first-primary schools and hobby groups, there were excellent collections from the Private School Galileo Bratislava, Žilina Jarná street, Art SLNEČNICE, a citizen's association from Bratislava. Compared to the previous year, this year's entries by Slovak children were of better quality, which has been reflected in a greater number of awards.

The 44th edition will culminate in the exhibition of all awarded entries, which will open in the presence of many ambassadors as well as political and cultural figures of the Czech Republic at the Lidice Gallery in Lidice on Tuesday 31 May 2016. The invitation to the opening ceremony was extended to representatives of the schools awarded with the Prize of the Panel of Judges.

The exhibition will take place in Lidice from 31 May till 30 November 2016. After that, the Art School Most will follow as a venue as well as other locations in the Czech Republic and abroad.

Finally, we would like to thank all children who took an interest in the theme SCHOOL? EDUCATION! to such extent that they felt like render it and send their work in. It was not esy to select the best and it is impossible to award all of them. We believe that working on this year's theme, the children enjoyed themselves, that the work made them move forward on their artistic way and inspired their minds, because this is the main purpose of creative work. Our thanks go also to all the teachers, for whom this year's theme was not easy to grasp; however, they managed to create interesting and beautiful collections with the kids and we believe that also for them it was an enriching experience.

This year's edition has also brought the co-operation with the Comenius Museum in Prague where an exhibition will take place, consisting of entries directly inspired by the teacher of nations.

These rules come into effect on 2 November 2015.