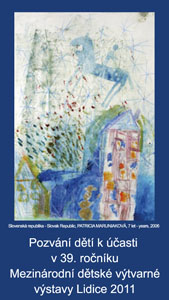 The theme of this year’s international fine arts competition “THAT IS WHERE I LIVE, THAT IS ME” attracted children and teachers to such an extent that they contributed to the record number of the this year’s entries. And again, the panel of judges had to assess some more entries than in the previous year – 25,450 areal and spatial entries combined. The children reflected everything around them in their creations, everything they live amidst. The themes that occurred frequently were architecture, cities, towns and villages with their landmarks, houses and gardens, nooks and little rooms with dolls. Children often made their self-portraits or drew their families and friends.

Members of the international panel of judges appreciated and commended those schools that had sent in thoughtfully created collections based on the knowledge of the means of expression in fine arts, refined collections containing sensitively and discriminatingly selected entries. It is obvious that high-quality education in arts and professional approach of individual teachers are the prerequisites of good results. Besides those high-quality entries, however, there were also many entries that dwelt on what is obvious at the first sight, not going more deeply into the matter; some of them demonstrated inconsistency, indicating that the children had not been taught about the materials and their potentials in visual arts.

Notwithstanding the pluses and minuses, it is gratifying that more and more children from more and more countries are participating in the exhibition – for the first time ever this year we received entries by children from Algeria, Belgium, Brunei, Djibouti, Kyrgyzstan, Panama and Turkmenistan – and that the numbers of entries from individual countries (Azerbaijan, the UK, Uzbekistan) are raising as well. These facts suggest good work of the Czech diplomatic missions, which distribute information on the exhibition. The numbers of entries from individual countries differ significantly – apart from large collections from Belarus, Bulgaria, Latvia, Russia, Turkey, Ukraine and newly also Hong Kong, there were also countries that had only several entries (Bangladesh, France, Italy, Cape Verde Islands, Hungary) so that it was impossible for the panel to assess the artistic standard of the country and to select the very best of it. Established success went to children from Bulgaria, India, Iran, Japan, Latvia, Malaysia, Russia and Turkey while photography saw outstanding entries by children from Croatia, Russia and Ukraine. A heart-warming fact is that also the number of participating Czech and Slovak schools is raising – this edition saw entries from 383 schools in the Czech Republic and 77 ones in Slovakia.

Out of the total 25,450 entries from 66 countries 1,471 were selected by the panel of judges to win prizes including 212 medals. Out of 15,983 foreign entries 622 won prizes, among them 92 medals (67 individual medals and 25 medals to schools for their collections). The most medals were given to children from Bulgaria, Latvia, Russia, Turkey and Ukraine.

The 39th edition of the competition culminated in the exhibition of winning works, which was opened ceremonially at the Lidice Gallery at Lidice on 1 June 2011, in the presence of many ambassadors and political and cultural figures of the Czech Republic. An invitation to the opening of the exhibition received representatives of the school awarded with the Prize of the Panel of Judges this year – the laureates from the school Simply Art from Hong Kong.

The exhibition at Lidice will be open from 1 June to 31 October 2011; then, in a reduced extent, it can be seen at other places of the Czech Republic – at the Primary Art School Most, NKP Ležáky and NKP Lety. The touring sets of exhibits are available for loan to schools, libraries or other cultural facilities.

Our thanks go to all who took part in the competition, to all who drew, painted or modelled their vision of the given theme and sent their creations to the competition, regardless of whether they received a prize or not. Thanks to those contributions, this year’s exhibition is again a unique one! We thank also to all teachers because it is the character of the teacher, his skill, knowledge, zeal and responsibility what plays a vital role in good results of children’s art work.

Ivona Kasalická, Head of the Lidice Gallery and Curator of ICEFA Lidice
May 2011