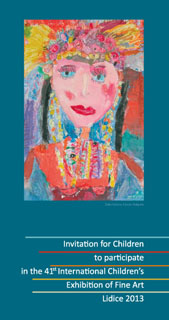 this year we commemorated the 10th anniversary of a global convention on protection of folk arts, crafts, ceremonies and traditional folk knowledge, the UNESCO Convention on Protection of Intangible Cultural Heritage. To mark the anniversary of this extraordinary convention, the Czech Commission for UNESCO recommended dedicating the 41st International Children’s Exhibition of Fine Arts Lidice to the theme “Traditions and Heritage of My Country’s People” with the following sub-themes: traditional clothing in my country, beautiful things made by craftsmen in my country, village dances, village wedding, folk legends of my country - what are they about?, folk customs, ceremonies and traditions in the course of the year.

Well motivated and familiarized with the theme by their teachers, children depicted much of the listed heritage in their respective countries – traditional crafts, ceremonies, customs and folk creativity, often rare and unique to a region even in the country of their origin, worthy of preservation for future generations. Among the most frequent of the themes of entries by Czech children was merry-making at Shrovetide, Moravian dances, folk costumes and traditional crafts. The pictures brought to life individual figures as well as whole parades, masks, national and regional myths and legends and also historical figures and fairytale characters. The panel of judges was made acquainted with many wedding guests, musicians, costumed suites and craftsmen.

The received entries showed that schools took a very responsible attitude to the exhibition. This year, the vast majority of schools sent in a well-made and well-chosen collection of art works, which clearly showed a discriminating and thoughtful approach. The schools and children’s leisure centres should be commended, for their entries not only pleased the panel of judges, but often amused them and made them laugh; it is good that there was no lack of wit and humour. The personality of the teacher, his/her skills, knowledge, responsibility and zest, continues as the decisive factor in the educational process. Also admirable was the number and variety of the media and materials employed. The planar entries included drawings, paintings and prints, made manually or digitally, as well as photographs. As to the spatial entries, the panel of judges assessed entries of paper, textile, wire and glass as well as items of pottery and mixed media.

Despite all the pluses and the generally good quality, the same problems arose as every year – illegible, incomplete or missing data about the creator or the school, sizes extending the limits set for the entries, needless or unsuitable making-up of entries and diversions from the set theme. Such entries had to be eliminated, often in spite of their indisputable quality.

This year we received 24,485 entries from 68 countries, many of which participated in the competition for the first time (Australia, New Zealand, Sweden). Some countries had more schools and children engaged (Armenia, Croatia, Lithuania, Macedonia, Montenegro, Pakistan, Slovenia and Serbia). The numbers of entries from various countries varied widely: apart from large collections sent in, as usual, from Hong Kong, Latvia, Russia, Turkey and Ukraine there were also countries represented only by several entries, often from the same school, which prevented the panel of judges from assessing the artistic standard of the country and selecting the best there was.

Assessing the entries, the panel appreciated national traditions and features of the respective countries. Among the planar entries, the best received ones were those from China and Hong Kong, Croatia, Latvia, Russia and Ukraine. Standing out among the planar entries were paintings from Srí Lanka, which participated in the competition after quite a long gap caused by a natural disaster. As to the photographs, the panel was pleased again with first-class photos from Croatian photo clubs and Russian and Ukrainian schools. In the category of spatial entries, the attention of the panel was attracted by glasswork and pottery from Latvia and astonishing collections of traditional Shrovetide masks from Hungary and Macedonia.

There were fewer participating Czech schools (particularly nurseries, primary schools and special schools) than last year and in previous years. Perhaps some schools that had not won any ICEFA prize decided not to participate any longer. This decision is understandable, as the creation of collections to a given theme may be very demanding and complicated for the schools that are not able to dedicate a lot of time to art work, while limited in space and material.

Although there are photo clubs working at Czech schools, they do not sent in their photos to the competition and this year was no exception. As to the spatial entries, the panel of judges was pleased with the ceramic Shrovetide merry-making from the Primary School Červené Pečky, the set of ceramics from Primary Art School Český Krumlov, PAS Most, PAS Kolín, the set of wire musicians from PAS Strakonice and the parade of roving artists from PAS Blatná.

Out of 17,404 foreign entries 724 won prizes including 122 medals (94 medals to individuals and 28 medals to schools for their collections). The most medals were given to children from Bulgaria, Latvia, Russia, Turkey and Ukraine.

From among the Czech schools, the Prize of the Panel of Judges, awarded to schools for their persistent, purposeful and excellent work, was given to Primary Art School Háj ve Slezsku, which presented itself with a rich and interesting collection – a collection of drawings and prints. The Prize of the Panel of Judges for foreign schools was awarded to Primary Art School Holíč, which sent in a series of first-quality multicolour prints. It should be noted that both schools have sent in their excellent works regularly for many years.

Thanks to a better organization of assessing entries (a two-round system) and an extended working space in the Lidice Gallery for the panel of judges, the work of the expert panel got much better this year. After the last year’s jubilee edition with a record-breaking number of entries, we updated the constitution of the competition to help better organize the competition. Although this year had also more than 24,000 entries, the panel of judges worked in a calm atmosphere of mutual understanding. The international aspect of the panel contributed to interesting exchanges of opinions and comments, putting the language skills of all judges to a test.

The 41st edition will culminate with the exhibition of all awarded entries, which will open in the presence of many ambassadors as well as political and cultural figures of the Czech Republic at the Lidice Gallery in Lidice on 29 May 2013. This year, the invitation to the preview of the exhibition was extended to the representatives of the schools awarded with the Prize of the Panel of Judges – medallists and teachers of Primary Art School Háj ve Slezsku and the Slovak Primary Art School Holíč.

The exhibition will take place in Lidice from 30 May till 31 October 2013, then be mounted at Primary Art School Most and at the other locations in the Czech Republic and abroad.

Our thanks go to all who took part in the competition, to all who had drawn, painted, printed or modelled their vision of the given theme and sent in their creations to the competition, regardless of whether they won a prize or not. We thank also to all teachers because it is the character of the teacher, their skill, knowledge, zeal and responsibility what plays a vital role in good results of children’s art work.

Ivona Kasalická, Head of the Lidice Gallery and Curator of ICEFA Lidice
May 2013

These rules come into effect on 2 January 2013.