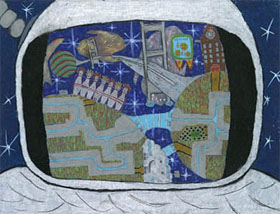 The 37th International Children's Exhibition of Fine Arts Lidice 2009 will be opened in the Lidice Gallery of the Lidice Memorial on Wednesday 27th May 2009, attended by ambassadors and political and cultural figures of the Czech Republic.

The best child artists from the Czech Republic and the best artists from abroad will be awarded “Rose of Lidice” medals during the ceremonial opening. This year Lidice will witness the arrival of an 8-year-old girl Ioana Bianca Anton from the Vasil Conta school at Iasi in Romania and a 6-year old girl Frederika Krompaská from the Primary Art School Spišská Belá in the Slovak Republic. The third foreign laureate whose painting caught the eye of the panel of judges is five-year-old Jan Alfonso Quilles Chytrý, who will come to Lidice from distant Mexico. His visit is possible only thanks to the support of the Ministry of Foreign Affairs of Mexico (Secretaría de Relaciones Exteriores de México) and the patronage of the Embassy of Mexico in the Czech Republic.

Children from the Japan school in Prague will appear at the opening. An accompanying programme will be enlivened with presentation workshops of the National Technical Museum, which take place from 9.30 a.m. and from 0.30 p.m. Also at 0.30 p.m. there will be a talk with a slide show by people from Stefanik Observatory in Prague. From 9 a.m. to 2 p.m. the visitors will be able to have a look through telescope from the Stefanik Observatory Astrobus as well as to try attractions and entertaining plays prepared by the Leisure-time Centre Labyrint Kladno. 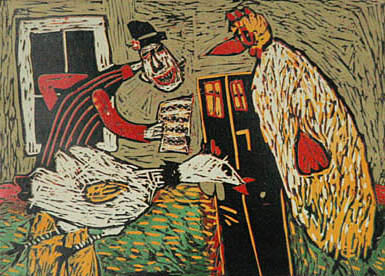 As indicated by its name, the exhibition and competition is held every year to commemorate the murdered children of Lidice. Initially national competition (established in 1968) changed its status to an international one in 1972. The exhibition is well-known among young artists and their teachers not only in our country but all over the world. Children from dozens of countries of all continents, including such exotic countries as India, Indonesia, Philippines, Kenya, Srí Lanka and Zimbabwe, take part in the exhibition every year.

As the year 2009 was declared the Year of Astronomy, the UNESCO proposed to dedicate the 37th ICEFA Lidice 2009 to a theme relating to THE UNIVERSE. Children could draw inspiration from the many following detailed themes: "Discovering the universe", "How to fly to the stars", "I wonder what is there on the other planets", "Sky and stars over my country", "What an astronomer looks like". 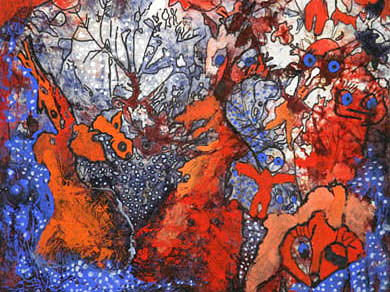 We received more than 21,000 entries by children from 53 countries this year, with the most coming from Turkey (2 537 entries) and Serbia (2 026 entries). We are pleased to say that, thanks to enhanced publicity, this year witnessed much more participating schools from the Czech Republic (399 as against last year’s 137) and the Slovak Republic (71 as against last year’s 22). Moreover, we received entries from countries which did not participate in previous years, e.g. from Italia, Mexico, Germany, Norway, Austria, Spain or Afghanistan.

Like every year, it was very interesting to compare styles of submitted entries and their degree of elaboration as well as the inventiveness and the creative contribution of a child or a group of children. Most entries coming under the categories of Painting, Drawing, Printmaking and Photography represented children’s vision of the universe and extraterrestrial civilisations, repeatedly exploiting the themes of the Solar System’s planets, constellations, rockets, astronomers and space explorers. Czech schools, unlike the foreign ones, were allowed to submit 3D entries as well as ceramic works, this year representing groups of weird extraterrestrials, space vehicles or models of the Solar System’s revolving planets. Again this year there was presented another type of children’s group work – a school project resulting in a presentation of creative activities of children. This year’s competition was enlivened by records of such projects, e.g. working with snow or making ice sculptures (Music School Staicele, Latvia), a cosmic feast (Primary school Poljčane, Slovenia) or a cosmic wedding (Primary Art School Prostějov, CR).

Out of the total 21,731 entries from 53 countries 1,467 were selected by the Panel of Judges to win prizes. Children from abroad received 593 prizes, out of which 48 were individual medals and 18 were medals to schools for their collections of exceptionally good works of fine art. Most of them were won by children from Bulgaria, Lithuania, Latvia and Romania. The eye of the panel of judges was caught also by pictures by children from Thailand, Indonesia, Philippines, Japan, Peru and Mexico, which make a welcome change in the exhibition every year.

The exhibition at Lidice will continue till 1 November 2009, then, in a reduced form, it will be to be seen at other places of the Czech Republic – at the Primary Art School Most Gallery, at NKP Ležáky, at the Museum of Trades and Building at Drnovice, at Techmánie in Plzeň and even at such an exotic place as the village of Lidice in distant Brazil. You are cordially invited to visit these places.

Mgr. Ivona Kasalická
Head of the Lidice Gallery and Curator of the International Children’s Exhibition of Fine Arts Lidice
312 253 702; 736 642 318, kasalicka@lidice-memorial.cz