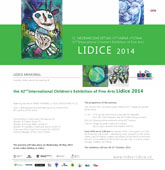 On Wednesday, 28 May 2014 at 11 a.m., the 42ND INTERNATIONAL CHILDREN’S EXHIBITION OF FINE ARTS LIDICE 2014 was opened at the Lidice Gallery in Lidice in the presence of ambassadors and political and cultural figures of the Czech Republic.

Among those present were Mr. Přemysl Sobotka, Vice-President of the Czech Senate, Mr. Jiří Dientsbier, Minister for Human Rights, Equal Opportunities and the Legislation, Mr. Pavel Hlubuček, Director of Museums and Galleries of the Ministry of Culture, Ms. Kristina Larischová, the Chief Executive of the Analytics and Communications Department of the Czech Foreign Ministery, Mr. Karel Komárek, the Secretary of the Czech Commission for UNESCO, Ms. Monika Koblerová, the Programme and Communication Director of the Czech Centres, Mr. Josef Zedník, the Head of the Exhibition’s Jury and Ms. Zuzana Tornikidis, the Director of Agrofert Foundation, the new partner of the exhibition. Representatives of 24 diplomatic missions attended the formal opening, namely the ambassadors of Lithuania, Pakistan and Venezuela and embassy representatives of Albania, Armenia, Australia, Bulgaria, Egypt, Croatia, India, Iran, South Africa, Latvia, Malaysia, Morocco, Myanmar, Germany, Romania, Slovinia, Serbia, Thailand, Turkey, Ukraine and the U.S.

From morning through much of the day accompanying activities were held around the Lidice Gallery premises – art and craft workshops, where children made animals out of fleece, entertaining games prepared by The Leisure Centre Labyrint Kladno, a presentation about the Ohárka family farm, butter churning, and horse-and--carriage rides.

At 10.45am the Ukrainian group Džerelo from Prague introduced the Prize Award Ceremony with a few folk songs and dances performed on the garden stage in the gallery. After this Mr. Milouš Červencl, Director of Lidice Memorial, welcomed everybody and briefly informed them about this year‘s record-breaking number of children and countries participating. Followed a short greeting by Mr. Přemysl Sobotka, Vice President of the Czech Senate, who was later joined on the stage by Mr. Jiří Dientsbier, the Czech Human Rights Minister, Mr. Pavel Hlubuček, Director of Museums and Galleries of the Ministry of Culture, Ms. Kristina Larischová, Chief Executive of the Analytics and Communications Department of the Czech Foreign Ministery, and Ms. Zuzana Tornikidis, Director of the Agrofert Foundation, Together they handed out prizes to 56 medalists from Czech schools, which besides medals and Rose of Lidice diplomas included a cup decorated with each of the winners’ artwork, sports equipment and art books. As an inventive touch, the Atlas company provided each medalist his or her own art work in the form of a paper fold-your-own wall hanging.

A special part of the ceremony came with the announcement of the five winners of Alík.cz server’s on-line poll, in which children were able to vote and choose their own favorite piece. Receiving the most votes were the works by Tereza Hudečková (Kroměříž), Vendula Čampulková (Strakonice), Ondřej Brůha (Řevnice), Filip Roušal (Červené Pečky) and lastly Nikol Ausficírová (Opava), who was also the overall winner of the poll, receiving 10 thousand crowns for her school from the Agrofert Foundation.

Two medalists from The Primary Art School Holíč, Slovakia came to Lidice to collect their awards in person. They received them on stage from Mr. Karel Komárek, Secretary of the Czech Commission for UNESCO, Ms. Monika Koblerová, Programme and Communication Director of the Czech Centres, and Mr. Josef Zedník, Head of the Exhibition’s Jury. They also presented the exhibition’s main awards – this year’s Jury Prize for Czech Schools was given to the Vladimír Ambrose Primary Art School Prostějov for their consistently excellent work with children and for an outstanding selection of 3D works. The school’s 3 students came in person to collect their medals and their teacher, Mrs.Hana Palacká, received the crystal palette, donated by the Rückl Crystal company.

This year‘s Jury Prize for foreign schools was awarded to Photostudio MIG Donetsk, Ukraine, for their persistent excellent work with children and for a remarkable collection of photography. The child representing the school, 13-year-old Katya Kravtsova, unfortunately could not come due to hostilities surrounding the Donetsk airport and train station. Her teacher, Ms. Iryna Logachova, managed to get to Kiev by train, followed by a flight to Prague, and accepted the crystal palette for her school from the dignitaries named above, as well as from Mr. Mykhail Kovbasa, Consul of the Ukrainian Embassy in Prague.
Invitation for the ceremonial opening

After the award ceremony, guests were invited to tour the exhibition installed on the 2nd floor of Lidice Gallery. Following the formal ribbon-cutting ceremony (Mr. Pavel Hlubuček along with a child survivor of Lidice, Mr. Pavel Horešovský), the 550 visitors were able to admire over 1400 pictures and 3D works by children from around the world. Concluding the opening ceremony, the theater group Koňmo from Kardašova Řečice performed a play named Jak šlo vejce na vandr – How the egg went on a walkabout. Despite the unfavourable weather and heavy rains, leaving the garden soaked and muddy, this year’s ceremony was seen as a success and praised by many visitors.

The exhibition will be on display in Lidice from 29 May till 31 October 2014. After that, the venue will move to PAS Most, Mostecká Street along with other locations in the Czech Republic and abroad. Last year’s exhibition will be presented in the Izopark Gallery, Moscow in August 2014, and in Kharkov, Ukraine in November.


Invitation for the ceremonial opening

The preview will take place on Wednesday 28 May 2014 at the Lidice Gallery in Lidice.
The programme of the preview:
The children from Ukrainian group Džerelo from Prague will appear at the event.

From 8:00 am to 2:00 pm the garden of the Lidice gallery will host the following side events:

Entertaining plays prepared by the leisure centre Labyrint Kladno, creative workshop on the theme of domestic animals, a presentation of family farming and rides in a horse-drawn carriage, weather permitting.